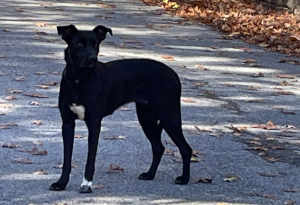 “Have you seen that dog?”

A very sweet-looking dog was roaming the area, crisscrossing the golf course, trotting down the street outside my office window, sleeping on another neighbor’s outdoor furniture. Obviously dumped, possibly mistreated. She dodged whenever anyone tried to approach, head down and tail tucked firmly under her belly.

We congregated in a central driveway to discuss the problem. The local no-kill shelters were full, and couldn’t even offer help catching her. And the temperatures, which had been unseasonably warm, were about to become unseasonably cold.

She started letting people pet her, but only lightly, skittering away if anyone tried to hold her or pick her up. 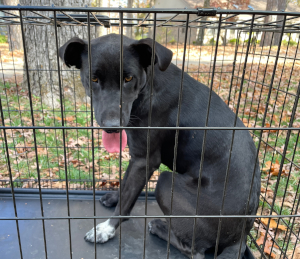 Three of us were determined. Betweeen one of the dog-walkers (the one who agreed on the “special hell” principle) and two other neighbors, one of whom donated a dog crate and a can of food, the dog was caught. It took a few handfuls of food, tempting her partway into the crate, and then a quick push on her butt and a fast closing of the door. After which, surprising everyone, she settled down remarkably happily.

You’re probably thinking I’m going to talk about the value of teamwork.

What I want to emphasize is the value of taking action. Plenty of people were discussing the problem, agreeing that it was a problem, and that something needed to be done about it.

It took three people taking action to solve the problem, catch the dog, and get her safely into a foster home.

Whatcha gonna do about it?

Whether it’s a problem with one of your employees, not knowing the next steps in your career, a lack of leadership skills in your company – just to name a few things I know a lot about! – whatcha gonna DO about it?

The steps are simple.

We had a dumped dog needing care. She seemed healthy, sweet, and scared. We needed to get her caught and fostered before it got life-threateningly cold.

Now you: what’s the problem you’ve been thinking about, but haven’t done anything about (yet)?

A no-kill shelter was one option – until we discovered they were all full.

Catching the dog was the first priority; finding her a safe place came second, and was a moot point if we couldn’t catch her.

Now you: what’s a possible solution? Note that we didn’t have an end-game, because the first step needed to happen before anything else could.

The initial driveway consultation involved multiple people. Everyone agreed action was required, and everyone agreed that catching the dog was the first step. But it took determination by a few of them to complete the cycle and take action, locating a loaner dog crate and setting up the communication so action happened when she showed up.

Now you: what’s the next step? As I said, don’t get stuck thinking you need to know the whole route. Take the next step, and it can be a very tiny step if that’s all you know to do.

Once she was in the crate, we needed to determine the next step: finding her a place to stay. The three involved in catching her all had dogs and weren’t available to take on another one. One of the golf course employees had said he might be able to take her – but upon reflection, it turned out to be impossible. However, another concerned neighbor was willing, at least temporarily.

The crated dog was loaded into the back of a truck and taken to her new foster home.

Now you: what’s your next step? If you haven’t solved the problem completely, there’s more to do. And I’ll emphasize it yet again: you don’t need to know the whole path in order to move forward. We had no idea where she’d end up, but we knew the first thing had to be actually catching her.

Define the problem you want to solve

From a professional perspective, as an employee, you own your career; as a leader, you’re at least partially responsible for helping your people develop theirs. If you’re not getting the support and clarity you need, that’s a problem you can solve. If you’re not giving your people the support and clarity they need, that’s a problem you should be working to solve.

And yes, of course this process can also be applied to your personal life, and to social justice and activism.

It’s up to you what problem(s) you want to solve. It’s also up to you to take action.

But what about the dog?

So far, so good: the foster people seem to be thinking seriously about keeping her. She’s well-behaved, young, and healthy. They’ve named her, their dog gets along with her, and she seems to be a remarkably happy, sweet pup. Fingers crossed! 🤞

Are you part of a medium-sized business, and wondering if you can get help with this?

There are a lot of BIG consulting companies who work with BIG businesses. That’s not me, and if that’s not you, we should talk. Contact me and we’ll set a time to see how I can help solve the leadership development / professional development problems you want to take action on.