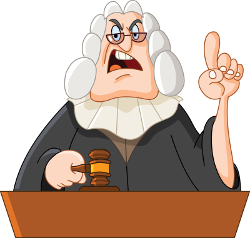 Fear of being judged shows up in many ways.

We don’t say what we really feel. We don’t wear what we want to wear. We don’t plant our garden – metaphorically or literally – the way we want to plant it.

We don’t raise important issues with our families, and we hold back from voicing concerns and ideas at work. We don’t ask questions that might reveal our ignorance or make us look stupid.

We don’t speak out about things that bother us or conflict with our values.

Maybe you proudly wear whatever style you want. Perhaps you dug up all your grass and planted a gorgeous cottage garden – or a meadow – in the midst of a sea of manicured lawns. Or you might be known as the one who speaks truth to power.

Why are we concerned about being judged for some things, but not others?

Here’s the secret: when we fear being judged by others, we have already judged ourselves.

I’ll put it another way.

You’ll never fear others’ judgement if you aren’t first judging yourself, questioning your ability or your right – or, more likely, your safety – in doing or being whatever it is you’re concerned about.

When we really, truly want something but we fear doing it, having it, or being it because of what we think others will say – it’s the voice of the inner critic that’s holding us back.

There’s a lot of talk in self-improvement and self-help circles about not caring what others think.

The thing is, there are plenty of situations in which you really don’t care what “they” think. Why? Because you know everything’s fine.

So to say we shouldn’t care what others think is missing the first, most important step.

We have to not care what our inner critic thinks.

If you’re yearning to do, have, or be something, but you’re worried about what “they” will think – stop and look inside. What’s the voice in your head – the voice of your inner critic – saying? What’s the inner critic projecting out into the world, onto “them”?

If you can bring yourself to not care what it’s saying, you’ll stop caring what “they” think.