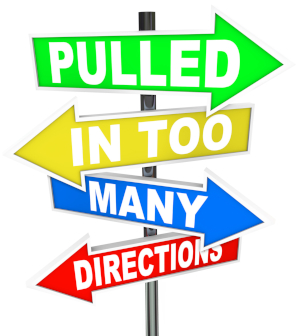 I am not a fan of long hours, hustle-at-all-costs, and burnout. Been there, done that, and I don’t even want to see the T-shirt!

Yet I’ve attended plenty of meetings where the team was exhorted to “crush it,”  “kill your numbers,” “beat the {unreasonable} deadline,” and so on.

Frankly, even typing those terms makes me feel slightly ill.

So when I ask, “Are you ready to WIN?”, that approach is not what I mean. In fact, quite the opposite!

As a leader, you’re trying to keep up with a million things at once. Especially if leadership and management are new roles for you, figuring out what you’re supposed to be doing, never mind how to handle it all, can be overwhelming and exhausting.

Did you know that for 500 years from the first known occurrence of the word “priority” in the 1400s, there was no such thing as “multiple priorities”?  Yep. “Priority” was never plural until, sometime in the 1900s, someone brilliantly (not!) decided that we could get even more done if we had multiple “top priorities.”

Does that sound familiar? Maybe so familiar that you hadn’t even noticed that it’s a little … odd … to operate as if there could be several Most Important Things To Do?

There can be only one Most Important Thing.

And so when you’re swamped with all the things, stop. Breathe.

Right now, this moment. Not tomorrow, not yesterday, not this afternoon.

That’s the WIN I’m referring to.

And that question can change your life, if you let it.

(This question, and the data regarding “priority” vs. “priorities,” is from Essentialism: the disciplined pursuit of less by Greg McKeown. I’ll have more to say about this book, and a few others, in a future post on books every leader should read.)