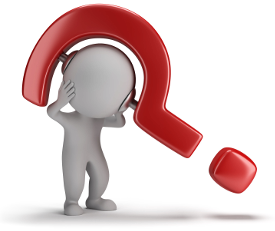 It’s an old saying. “Ask a stupid question, get a stupid answer.”

Despite the passionate counter-statement “There are no stupid questions!”, there absolutely are questions that invite a stupid answer.

How does that happen?

A question asked without providing context for how the answer will be used significantly reduces the likelihood that there will be a real exchange of relevant information.

Which is a long way of saying that, without context, a question begs for a not-very-useful answer (a.k.a. a stupid answer).

I think we’ve all experienced how frustrating it is to be asked something without any context, but here are two brief examples.

At a party some years ago, someone came rushing into the kitchen asking for a towel.

Responding usefully to that request was impossible without knowing what the towel was for: to wipe a baby’s face, dry a plate, or – as was the case in this example – clean up dog slobber? Or something else entirely?

I recently spoke with a colleague who had been asked about the project close-out process she’d done for a client. My colleague was given no insight (no context) into why the question was being asked; she was only told that the client’s Program Management office was requesting the information.

Needless to say, even though she knew the project had gone smoothly, my colleague spent several days with a knot in her stomach wondering if she’d done something wrong. Furthermore, her answer was a bare-bones recital of the facts; without knowing the why behind the question (the context), she had no way to ensure that her answer was relevant and complete.

Asking for a towel without providing input into why you want the towel means there’s a high likelihood of getting the wrong sort of towel. One doesn’t wipe dog slobber off the floor with a towel intended for your good china.

Asking for project-closeout procedures without providing input into why you want that information will, again, elicit a potentially incomplete and not-very-useful answer. My colleague never did learn the “why” in this case. If she had known, she almost certainly would have been able to provide additional information that might have offered completely different insights for the people asking.

“Ask a contextless question, get an irrelevant answer” isn’t as catchy as the original phrase, but it’s more accurate and more useful.