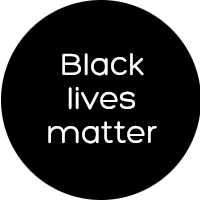 I was gently taken to task last week by a Black friend who said she “would have welcomed a message” from me when the Black Lives Matter protests started after the police murder of George Floyd.

I won’t deny it: that stung, and it should have stung. I deserved it.

The challenge for so many of us white people is both simple and complex. We don’t know what to say.

Speaking for myself, but suspecting I’m not alone: I’m feeling a mixture of uncertainty, guilt, denial, anger, frustration, sadness, and confusion.

What should we say?

How do we express our uncertainty, regret, shame, embarrassment, confusion, and desire to help in a way that

But here’s what I do know: saying nothing is worse.

And? I get it. You’re not racist. Except – you are. I am. White people are racist because the culture and society are racist. It’s the fish-doesn’t-know-it’s-wet problem. Culturally inherent privilege is invisible to the privileged. And – and this is important – white privilege doesn’t mean life hasn’t been hard. It means the color of your skin hasn’t made it harder.

In any event, it’s not enough to believe and claim that we’re not racist.

If things are to change, we must become anti-racist.

How do we become anti-racist?

I’m trying to learn. And I’m going to make mistakes. As Ericka Hines (diversity and leadership consultant, coach, and trainer) puts it, “be humble and ready to fumble.” I’m trying!

And here are the resources I’m starting with:

White Fragility: why it’s so hard for white people to talk about racism, by Robin J. DiAngelo and Michael Eric Dyson

So You Want to Talk About Race, by Ijeoma Oluo

How to Be An Antiracist, by Ibram X. Kendi

There are plenty of others. I don’t know about you, but I’m overwhelmed by all the resources, and I don’t want to add more to the pile that you’re probably also dealing with. These are books because I’m a reader. If you prefer video or audio:

Ijeomo Oluo appears on many podcasts and video interviews; Google her

Ibram X. Kendi has also appeared on podcasts and video interviews, some of which are listed on his Media page (https://www.ibramxkendi.com/media)

Again, there are many others. Start somewhere. Where is less important than starting.

As a leader, are you ready to bring resources into your workplace?

Desiree Lynn Adaway is a consultant, trainer, coach, and speaker at The Adaway Group.

Ericka Hines is a consultant, strategist, trainer, curriculum designer, and Principal at Every Level Leads.

And understand this, too: it’s okay if you feel overwhelmed and exhausted by it all. It’s probably a good thing, because it means you’re paying attention.