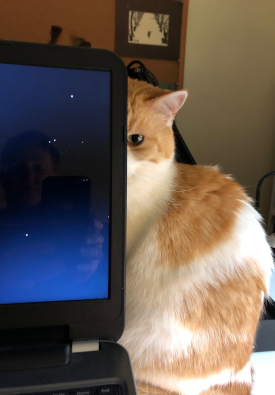 Also known as The Flickerator.

He’s an excellent trainer of humans.

His specialty is Stupid Human Tricks. He’s taught me to …

Speaking of the dog, we took her to puppy school, where we learned that training happens on both ends of the leash.

Here’s the thing: we all learn stuff throughout our lives.

And if we’re not intentionally teaching what we want people to know, well, you just might end up with stupid human tricks. Otherwise known as managers who are doing their best, but who were – as a client described just this morning – thrown in the deep end without knowing how to swim – or how to manage a team.

The question is, what are you teaching your first-line managers?

They’re going to learn how to manage, one way or another. But will they learn what you want them to learn?

You know what good management behavior looks like. (At least, I hope you do!)

Not to equate people-training and dog-training (though I’ll reiterate that dog training is always about the dog and the human ends of the leash!), but positive rewards work. We toss treats to the dog; you can give compliments to your people.

I mean that extremely sincerely. The more you catch your first-line managers doing the right thing, and then tell them about it, the more they’ll … do the right thing. We humans want recognition, acknowledgement, and appreciation from the people around us, especially those who have authority over us.

Think about the best manager you’ve ever had. Write down the three to five qualities you most admire about them. Those qualities don’t have to be specific to management or leadership; just things you really felt made them a good person.

Next, write down three to five things they did that demonstrated those qualities. Identify at least one action for each quality.

Now think about the worst manager you’ve ever had. Write down the three to five things they did that demonstrated how they struggled at being a manager.

Note that I’m not saying “qualities”; I’m referring to actions they took – or didn’t take. Why? Because I firmly believe that we are mostly not dealing with people who are deliberately mean. But when we think of someone whose style or behavior we don’t like, we’re usually tempted to make it “all about them” personally. And that’s not helpful.

You now have two lists: one on the good side of management behavior, and the other on the sad side.

What can you do, today and every day, to be most like the good side, and less like the sad side? Identify actions you can take – actions that fit who you are and the people you manage.

And then hold yourself accountable, every day, for living up to those behaviors.

In this way, you’re consciously and intentionally teaching yourself smart management and leadership – instead of defaulting to whatever reactions and habits you may unconsciously fall into.

It’s not an exact science

I’ve often said that leadership is a big fuzzy gray ball of uncertainty. Learning to manage and lead is a winding path with many opportunities for tripping over the unexpected.

Giving fledgling managers the opportunity to learn well – which includes making mistakes while having the support to recover effectively – is rewarding for all concerned – including the organization’s bottom line.

Teaching leadership skills to first-line managers doesn’t have to be expensive, time-consuming, or a case of “throw them in the deep end and let them figure it out.” Click here to learn more.