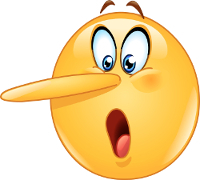 Whoa – did I really ask that?

Here’s the thing: we teach people, including our teams, colleagues, and family and friends, to lie to us all the time.

If this is something you’ve ever said to any of your team members, you’ve motivated them to lie to you about {whatever it was}. And the more often you say it, the more likely they are to lie.

Helping your team think through problems, rather than just presenting the issue to you and expecting you to fix it, is a good and necessary thing to do. It’s an important responsibility for you as a leader in developing your employees.

But if you always want them to bring you a solution along with the problem, you may find your team isn’t bringing you problems you need to be aware of. They might not be flat-out lying to you, but there is such a thing as a lie of omission. As Wikipedia says, “Lying by omission includes the failure to correct pre-existing misconceptions.”

“Why did you do that? What were you thinking?”

“Why” questions feel accusing – even if you refrain from the follow-on “what were you thinking?” comment. You may need to offer corrective feedback to someone who’s screwed up, but even if their screw-up was significant, asking “why” is likely to lead them to a cover-up – a.k.a., a lie.

If someone’s made a big, costly mistake, you need to take corrective action, up to and including firing them. But if you want to help someone learn and grow from their error, ask “what happened” instead of “why.”

There’s a lot said in management and leadership philosophy about making it “safe” to make mistakes, ask for help, and so on. There’s merit in that, of course; no one wants to come to work walking on eggshells or feeling as if they need to lie in order to get through the day.

But “safety” is an illusion in business and in life as a whole, and trying to make it “safe” to make mistakes leads to complacency and sloppiness.

Besides, we can’t learn anything without fumbling our way along in the beginning, which includes making mistakes – but if the mistake-maker is ripped for their error, they won’t try, won’t learn, and, yes, will lie.

The balancing act for the leader lies in offering enough of a learning-and-growth challenge without overdoing it. Then mistakes will be manageable with support, coaching, and mentoring. And if you set it up so that the employee knows that mistakes are inevitable and expected – and avoid the three pitfalls I list above (as well as others you may think of in reading this) – you’ll create an environment within which your team tells you even the hard truths.