My brother, ten years (almost to the day) younger than I am, played soccer when he was a kid. 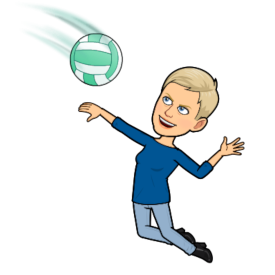 I’m part of the pre-soccer generation. Though I was a killer on the singles badminton court, and a crack archery shot in high school gym class. And I hated volleyball. Ugh. That Bitmoji image here? Completely untrue and unrealistic.

But the recent article I read on Fast Company‘s website rang true, nonetheless. They cite a study (sadly, without attribution) of NBA players. I quote:

When a team of organizational psychologists studied the NBA, they found that a coach’s behavior in a single season influenced their performance for the rest of their career. In evaluating almost 700 players’ performance, those who played under a coach with an abusive leadership style saw a drop in performance, as measured by a player efficiency score. But the effects weren’t limited to the season with that coach. The impact stretched to the player’s entire career. The player’s career trajectory shifted a notch downward. Not only did their performance drop, but the coach’s style rubbed off on them. Those players had more technical fouls (an indicator of aggression) throughout the rest of their career.

The article goes on to draw the obvious parallel between sports coaches and corporate managers. Both have tremendous influence on their teams, and sometimes that influence lasts for the rest of those team members’ professional lives.

I hasten to add that this doesn’t mean everyone who’s had a bad manager is doomed to be a bad manager. Quite the opposite, at least in the corporate world (I’m obviously not qualified to speak about professional basketball!). In my own case, I made a conscious choice to be the manager I wish I’d had, and then, later in my career trajectory, started this work I do to help others be the manager they wish they’d had.

Struggling managers have a large, long, and lasting effect

There’s no such thing as a manager in isolation.

By definition, they impact others. Their teams, their colleagues, their own managers, and everyone else they come in contact with – including their families, friends, and communities. We all know that we all take work home with us, in one way or another.

And the lasting impact on their team members – well, even when they leave for better options elsewhere, those team members will be cautious about trusting their new managers, no matter how good those new managers may be.

Struggling managers cost a lot of time and money

The cost to replace a failing manager is a lot more than most Google searches indicate. Most of those articles and references fail to take into account the cost of lost productivity, the cost of replacing people who leave because they can’t tolerate the manager’s behavior, the cost of hiring and training, the cost of lost institutional knowledge, and so on and on.

(Click here for my HR-executive-validated spreadsheet, and calculate it for yourself.)

It’s probably not their fault

This is crucial to understand.

Most people sincerely want to do a good job.

When a manager is struggling, it’s because of a few limited reasons. To start with, they may not have been ready for the promotion – and they may not really want to be in management.

But more likely, they weren’t given the training and support they need to excel.

The old saying “what got you here won’t get you there” is 100% accurate for individual team members who have been promoted into management. Their entire career has been all about do the tasks, pay attention to the details, perform well within your specific area of expertise.

Management is a complete about-face. The skill sets are wildly different.

But most companies just say, “Hey, congrats on the promotion! Go forth and manage!”

No wonder it often ends badly.

It doesn’t have to end badly! My own experience as an employee working for struggling managers is, as I say above, one reason why I do what I do – and why I created the Community of Practice, Learning, and Experience for managers. Check it out.