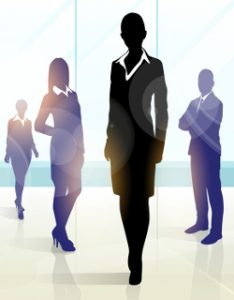 A leader is someone who inspires people to take action.

Leadership is the skillset or tools they use to do so.

There are variations, of course.

We’ve all known someone who doesn’t actually have an official leadership or management role who nonetheless is the pivot point for their team, the one everyone goes to with questions, the one everyone looks to for their reaction when big news or big change comes down.

This person is a thought leader. They usually aren’t being intentional about leadership; it just comes naturally to them, whether through their expertise, charisma, strength of character, or some combination of these qualities. Whatever those qualities are, they’re sufficient to inspire people to look to them for guidance on what to think and how to react – and act.

Sometimes thought leadership becomes intentional. These people can become giants – think Gandhi, for instance, or, for that matter, your favorite TED speaker.

The thought leader who starts a movement can change the world, or at least significant parts of it. As their movement grows, they take on increasingly active positions, making decisions and setting strategic direction that impacts more and more people.

And there’s no question that these leaders inspire many people to act!

By definition, political leaders also inspire people to act – even if the only action is to go out and vote!

Some political leaders inspire people to greater action: volunteering, demonstrating, and so forth – which can be either for or against.

And then we have official leaders within organizations. These are people who were promoted into their role, given a title that provides some level of authority as well as responsibility, and turned loose onto their teams to … lead.

The question is whether they actually do lead, or if they merely manage – and how well are they even managing?

If you’re not inspiring your team to take action – even if it’s the “right” action – then are you actually leading? If you’re using the force of your externally-granted authority to coerce, versus using leadership skills to inspire, are you leading?

I would say not. I think you’re managing, and maybe not even managing all that well.

Don’t misunderstand: I think there are leaders who inspire bad actions. As author and journalist Ryan Derousseau says, “Leadership is a tool, not a value, and effective leaders can be abhorrent forces in the world. I try to remind myself never to say admiringly that someone is a great leader. Instead, I try to be more specific. Not all great leaders are leaders for good.”

That’s a really important point. Just because we disagree with what actions a particular leader may be inspiring in their followers, that doesn’t make them a “bad” leader.

They’re still leading. They’re just not leading in a direction we want to go in.