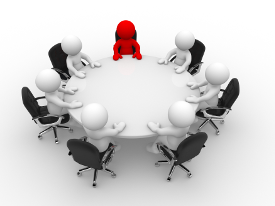 I know someone who equates leadership with power-over, and vehemently rebels at any sign that his business partner wants to encroach on his territory or take an active leadership role in their business. (I’ll call him James.)

I once worked with someone who didn’t have and didn’t want an official leadership title, but who by the simple force of her personality, intelligence, and insight was a powerful thought leader within the organization. (I’ll call her Samantha.)

I have a client who has grown into her leadership role over the last two years, learning that her fears of being seen as bossy or incompetent were unfounded, discovering that she enjoys and can easily hold her own in the company of her fellow CEOs, and realizing what it means to be a respected leader in her industry. (I’ll call her Jenny.)

What is leadership, anyway?

There are almost as many definitions of “leader” and “leadership” as there are people defining it. A Google search highlights an extraordinarily unhelpful definition:

the leaders of an organization, country, etc.
plural noun: leaderships
“a change of leadership had become desireable”

So, where does this leave us?

Often, though not always, it leaves us in conflict, usually because of misinterpretation and misuse of the power that comes with leadership – however we may define “leadership”!

James, who believes that leadership means someone has or wants the power to control him, sees guidance or even suggestions as threats to his independence. He disengages because he doesn’t recognize that he has the power to listen, understand, and contribute without being coerced or forced into choices with which he disagrees. Conflict arises as he rebels and refuses to collaborate, misusing his personal power in his vigorous efforts to keep himself free from others’ control.

Jenny, who feared being bossy or incompetent, sought to be liked by everyone and left her team confused about strategic direction. She has power by virtue of her experience, skills, and her position as CEO, but she was abdicating her responsibility to actually use that power effectively. Conflict arose within her staff, manifesting as workflow bottlenecks, dropped communication, and unexpressed frustration. The good news is that when she spent the time and energy to grow in her professional role, she was able to correct those issues and bring her staff with her into a cohesive, collaborative team.

And Samantha, who was comfortable with herself, her skills, and her opinions, and with her ability to communicate those opinions with conviction, was a powerful influencer, guiding decisions and strategy within her organization without ever assuming an actual leadership title. There was no doubt among those who worked with her (including the organization’s official leaders) that she was someone who exercised power effectively, strategically, and without creating conflict.

So, where does this leave us?

Is leadership what Samantha embodies: based on intelligence, technical skill, and personal confidence?

Is leadership what Jenny has grown into: decisive, yet collaborative; self-aware of her skills and experience and also of the gaps that need to be filled?

If we are to be leaders – whether we have the title or not – we have to define what we mean by leadership, both for ourselves (how we want to show up and create impact as a leader) and for those who lead us (what we want them to model in their words and actions and how we expect them to impact us).

All of these are true, of course, because we all know leaders who behave in these ways.

The question is, what do we expect from ourselves?

And how are we willing to examine our beliefs about leadership so that we can, as Jenny did, grow in leadership capacity?