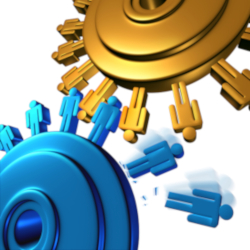 As a hiring manager, you know what I mean by that. Even if you don’t want to admit it.

But I’ll give you an example.

A client was convinced – as in, 100% certain, no question – that he couldn’t find great employees in his industry and geographic location.

He felt that the specialized requirements of the job just weren’t possible to fill in his relatively rural area.

So he’d hire people who were partially qualified – let’s say, the best he thought he could get – and hoped they’d work out, somehow.

(No disrespect intended to any of those people; they were good people and good workers, and went on to be good employees elsewhere. They just weren’t a fit for his business.)

I convinced him to stop doing what I call “flinging candidate spaghetti against the walls” – i.e., hiring randomly and hoping for the best – and instead start being more intentional and deliberate in his hiring process.

He now has a team of stellar employees.

I know you think you know what you want in an employee, but I’d be willing to bet you only know part of the picture. And I’ll also bet that you focus mostly on skills, not on the qualities that make someone a good fit for your company.

My clients are usually reluctant to write down these details, for two primary reasons.

But here’s the thing: if you don’t write it down, you don’t really know. Writing things down clears the mind and allows new ideas and insights to arise.

And writing it down doesn’t commit you to anything; it just creates clarity.

Because the next step is …

Now that you have your list, divide it into two: MUST have, and NICE to have.

Must Have is non-negotiable. (Really. Because then you’re just throwing candidate spaghetti at the wall again.)

Nice to Have is sparkles, chocolate frosting, and champagne.

And now you’re ready to …

Your hiring advertisement – whether it’s a post on Facebook, a listing in online job boards, or a request sent to your recruiter – should be clear about your company culture as well as about the Must Have skills and qualities.

And it should specify how you want candidates to apply.

Do you want them to apply by email? phone? snail-mail? Write a cover letter? provide a resume? Is there anything you don’t want them to do (for instance, don’t phone, don’t come into the office)?

Be prepared to say No, thanks

First rule: do not consider, even for a moment, anyone who doesn’t follow the application instructions. If you ask for a cover letter, and they didn’t provide one, they’re out. If you said not to call and they picked up the phone, don’t engage.

Second rule: do not bend, even a little, if any of your Must Have criteria aren’t met. The temptation may be huge, but that way lies heartache (and budget-ache; hiring is expensive).

The client I mentioned at the start of this article made that mistake – and I have to be honest: I participated in it. We had a candidate who seemed to be everything we wanted, but we skipped one crucial interview question. After a year of struggle on all sides, that employee moved on to a position elsewhere that she’s far better suited for. And my client (and I) learned a painful and unnecessary lesson.

Which leads me to…

Your interview questions should come directly from your Must Have and Nice to Have lists. Aside from the resume, how do you know if the candidate has the skills and qualities you want? By asking.

Define your interview questions ahead of time, in detail.

You don’t have to ask every one of them in the interview (but don’t skip the crucial ones!). And there will be follow-up questions you’ll ask that won’t be written down. But a prepared list will remove the ad-hoc quality of so many interviews, and you’ll come out of the interview with a clear sense of whether or not the candidate is your next employee.

It’s a lot of work

How much does it cost you to replace a failing employee? A lot more than you think, and I know you’re thinking, “Too much!” (For a detailed spreadsheet to calculate those costs, click here. Just be sure you’re sitting down when you see the final number.)

Especially when you have the pleasure of working with a stellar team of employees instead of an ad-hoc group of partial-fits and mis-fits.