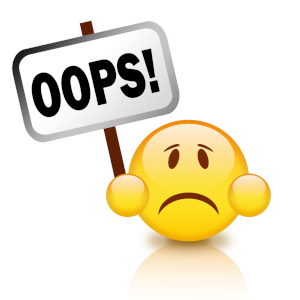 I had reached the end of my patience. And I wasn’t quoting Nike.

At the time, I was the Director of the consulting division at a mid-sized software company.

And the client wanted us to do something in their installation that wasn’t the best option. I’d done what I could to convince them to take the better way, but that would take more time and therefore be slightly more costly, at least in the short term. They weren’t having it.

Neither was my project manager.

The project manager had a very strong personal value of doing things the right way. I could absolutely respect that, and in general, completely agree.

But I’d already tried to convince the client, and they’d said no. Emphatically.

And we couldn’t eat the time required to do it the best way without getting paid for it.

My project manager was adament. So was I. And finally, I just snapped.

It was not my proudest moment of leadership. And yes, I apologized later.

I thought of that time when I saw this question:

What would it be like to watch a reality-show video of you leading?

We all make mistakes. That’s what it means to be a human, interacting with other humans.

And it very definitely is what it means to be a leader. Any leader on the planet, past or present – they’ve made mistakes. Multiple mistakes. (And if they don’t think so, that’s another mistake: they’re lying to themselves and / or are disastrously un-self-aware.)

When we, as leaders, as managers of teams, and as employees reporting to our own leaders, expect leaders and managers not to make mistakes in leading and managing, we’re setting everyone up to fail.

It’s obviously important and necessary to hold people, ourselves included, to high standards of performance and behavior.

That is not the same as refusing to accept that mistakes happen.

Make a mistake, apologize, fix as needed, learn, and carry on.

The apologizing, learning, and carrying on part after the mistake happens – that’s what takes courage.

But then, courage is a key leadership skill.

And one that everyone can learn.

The skills of management and leadership have often been called “soft,” but they are anything but. They’re hard. They’re tricky. They take practice. And people need support for the learning-and-practicing.