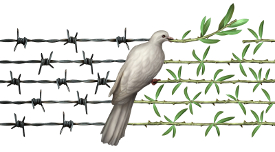 Some people avoid conflict. Others seem to relish it.

Based on those numbers, it seems like a lot more people are trying to fix the problem of conflict after it’s happened (“resolve” it) instead of seeking to handle it as it arises (“manage” it).

Surprisingly, “conflict transformation” comes in between the two, at over 13 million hits.

I say “surprisingly” because when I talk about conflict transformation, almost no one has heard of it. Eyebrows go up, eyes get round, and people say, “Oooo!”, which at least tells me they’re intrigued, even if they’ve not heard of it.

What does it mean to transform conflict, rather than managing it or resolving it?

To begin with, it means there’s no sticky, unpleasant emotional residue that conflict often leaves behind, even when “managed” or “resolved.” You know what I mean: that walking-on-eggshells feeling, or the resentment that lingers when the outcome feels unfair to one – or all – of the people affected.

Conflict transformation means that the people involved have stepped back from the inevitable emotional reactivity that conflict brings up in us. They’ve taken the time and care to hear what each other had to say, honoring (instead of judging) the reality of emotions and opinions.

They have allowed silence to be a partner in the process, giving each other and themselves space to think, explore, and experience different perspectives.

While often one or all of the people involved shift their positions during the process, conflict transformation doesn’t mean everyone miraculously agrees; nor does it mean anyone has to acquiesce, compromise, or change their beliefs or opinions. I think it’s negotiation expert Christopher Voss who points out that “win-win” often translates into “wimp-win” or even “wimp-wimp,” where someone – or everyone – essentially wimps out. And as he says, “splitting the difference” is usually a recipe for resentment and a feeling that the resolution is unfair – often on all sides of the issue.

It may seem as if I’m describing an impossibility, or at the least, an incredibly difficult journey.

It doesn’t have to be that way.

The first step is acknowledging that things can be different.