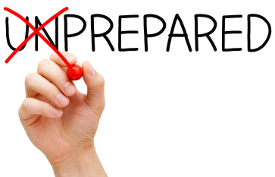 I could end this post right there, because that’s the message.

Practice doesn’t mean scripts; scripts aren’t helpful when things go sideways. And they will go sideways. As military strategist Helmuth von Moltke said, “No battle plan survives contact with the enemy,” and as pugilist Mike Tyson pointed out, “Everyone has a plan – until they get punched in the mouth.”

Practice allows you to create an ideal situation in your thoughts and emotions, and then – just as importantly – invites you to explore all the many things that could go wrong.

Practice means you don’t just know conceptually what result you want from the negotiation; it means you’ve talked it through with someone willing to play the opposition – and you’ve also played the opposition yourself and sought empathy for their perspective and desires.

Practice with someone skilled at negotiation gives you the added advantage of being coached to shift your words and try alternatives – and sometimes changing just one word, or rearranging the sequence of the facts you intend to present, can make all the difference in the world.

Practice helps you become less anxious and tongue-tied in the moment, because you’ve spent time – hours of time, over days and even weeks, if the issue is important enough – rehearsing (practicing) what you want to say and how you want to say it.

Practice means that if the other person becomes angry or emotional, you’ll be prepared to deal with it calmly and without succumbing to anger or emotion yourself.

Practice means that even when the plan does go sideways, and even if it goes sideways in a direction you hadn’t anticipated, you’ll be able to think on your feet because you’ve practiced exploring options and coming up with alternatives.

Practice means that if you make a mistake, you’ll have a far greater capacity to adjust and recover.

In the end, practice – serious practice, at the level I’m describing here – means you’ll almost certainly be better prepared than the other person.

And that means the end result is likely to be better than it would have been otherwise.

Practice. It’s worth the time and effort.