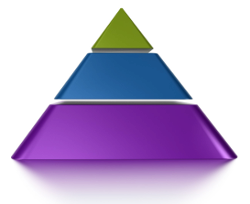 Any chocolate lover will tell you there’s no such thing as just chocolate – even dark chocolate comes in multiple levels of intensity, never mind milk or white chocolate!

I’ve written elsewhere about my dislike of the phrase “I hear you.”  To summarize what I say there, I hear a lot of things – my keyboard keys clicking, the wind in the trees outside, the cat purring – but that doesn’t mean I’m actually listening to any of it.

“I hear you” is level-one empathy. It’s meant well, of course: it’s meant to indicate that I’m listening to what you say. However, it can also be defensive, because it often comes with an unspoken, “but I sure don’t agree with you!”

Level-two empathy is, “I understand you.” This says I’ve paid enough attention to understand the intellectual content of what you’re saying.

This is more empathetic, and therefore more connecting, than level one, but it still doesn’t create the depth of connection needed for real communication to happen. As long as we’re dealing in the intellectual realm, we haven’t reached true empathy; we’re still operating at a surface level. As such, we won’t be effective in resolving disagreement or conflict, or in negotiating in a way that honors everyone involved.

Level-three empathy requires me to demonstrate that I understand how you feel as well as what you say. It’s not enough for me to say, “I get it”; I have to say something that proves that I get it. This requires me to pay deep attention to more than just what you say; I have to be aware of how you say it and what emotions you’re revealing. I have to watch your expressions (if we’re face-to-face) and listen to your tone of voice, and I have to rely upon my knowledge of who you are (however limited or extensive that may be) in order to interpret what I’m seeing and hearing.

Level-three empathy requires sensitivity and vulnerability. I have to be careful to phrase my interpretation in a way that validates your experience rather than dictating what it should be. And I have to be willing to be wrong.

The language of level-three empathy includes phrases like, “It seems to me you might be feeling …” and “I wonder if what you’re saying is … ” and “If I were in your place, I might be feeling … is that where you’re at?”

Level-three empathy takes practice. It requires sincerity (which levels one and two really don’t – one of the reasons why they tend not to lead to good outcomes!). It requires willingness to be open to differing opinions, and to accept that people don’t always believe, act, or feel the way we think they “should.”

And as I’ve said about empathy in general, it is so worth developing this skill!