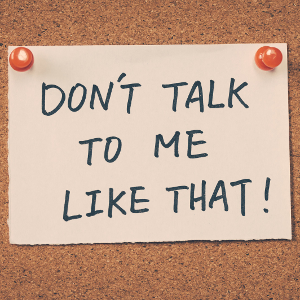 The language you use every day, including your word choice, the sequence you put them in, and the tone you create, plays a more critical role in how you’re perceived than you may imagine.

Your response to a question, a compliment, even a comment on the weather, affects what people think about you, your abilities, and your work in very subtle yet very powerful ways.

That might sound a bit far-fetched – after all, a word is a word, right? Those of us in the U.S. and in many other countries all speak English, right? So does it really matter all that much?

Yes. It really does matter all that much. So much so that it can make a huge difference in how much – or even whether – people respect you and your work.

Yes, thanks, that was a good job

How you respond to a compliment influences people’s perception of your abilities as well as your confidence (or lack thereof).

Like most people, you’ve probably found that compliments can be hard to accept. From early childhood, we’re generally taught to be “modest” about receiving praise – in other words, we’re taught to pass off whatever we’re being praised for as not especially remarkable.

But when you do the “aw, shucks, it weren’t nuthin'” shuffle, brushing aside the compliment with embarrassment or downplaying what you achieved, people believe you. And then they overlook the hours of overtime put in by your team, the expertise and skill that were required, and the polish you put on the finished result.

On the other hand, if you adopt a superior stance by taking all the credit for a team effort or claiming that only you out of all the people in the organization could possibly have pulled it off, you’ll be written off as arrogant and dangerously independent; not a team player.

Instead, practice a middle-ground approach. Get comfortable with language that asserts your confidence and competence without false pride or arrogance. “Yes, thanks, my team and I did a really terrific job!” is a great response. “Thank you – I appreciate your recognizing the effort it took to get that done well,” is another.

Have you noticed that people complain in habitual ways? One person might call anyone he disagrees with an “idiot.” Someone else might say any disappointing event – whether in the past or anticipated – was a “disaster.”

Did it occur to you that your patterns are just as obvious to others as theirs are to you?

Here’s the problem: complainers don’t have a lot of credibility. Therefore, complainers seldom get the best projects and tend to be passed over for promotion.

You may not be a constant complainer, but you almost certainly have typical complaining habits and hot-button circumstances that trigger those habits.

Pay attention for a few days to identify what triggers you to complain as well as what words  you typically use. (If you can’t figure it out, enlist the help of a trusted friend.)

Then pick more positive ways of expressing yourself. If a straight-up positive replacement feels too artificial, try a factual way of describing the person or situation, without the emotional load.

The “idiot” might be “unaware,” or could just be “Joe.” That “disastrous project” might be “delayed because of new requirements,” or just “the printer upgrade project.”

Save your complaining and venting for friends, spouses, and partners outside the office. Your career will thank you for it.