I heard a horrifying and profoundly sad statistic this morning. 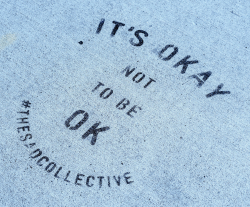 Over 60,000 school-age kids have buried a parent during the pandemic.

Someone on your team is dealing with grief. Maybe multiple someones.

Everyone on your team is not okay, because, well, we’re all not okay.

No one is okay right now.

And that’s the first thing that you as a leader can do to help yourself and your people: let them know that you know that everyone, to a greater or lesser degree, is struggling. Including yourself.

Ask them: “How are you doing?” And when they say, “Fine” (which is, after all, the standard, socially-acceptable, safe answer), come back again and ask, “No, really: how are you doing?” You might add, “Because I know we’re all not okay right now!”

You don’t have to magically make everything okay. News flash: you can’t! And that’s often why people don’t ask that question wanting, or expecting, a real answer: because they feel like then they’ll be responsible for doing something about it.

Here’s the thing: simply by asking, and truly wanting to know, you’ve already done something: you’ve made that person feel less alone and more understood.

And sometimes – many times – that’s the best and only thing we can do.