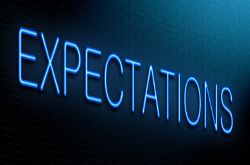 Last week, I facilitated a two-and-a-half-day boot-camp-style workshop. It was intense.

Especially since after the first hour and a half, participants were upset, complaining, and threatening to leave.

By the end of the second day, they were raving fans.

It all came down to expectations

The marketing and pre-workshop emails hadn’t set expectations about what was going to happen. People arrived expecting a traditional workshop format: they would sit and take notes, and the presenters (there were five of us, though I was the program designer, developer, and the primary speaker and facilitator) would stand at the front of the room with bullet-pointed slides and teach.

A boot camp is different. A boot camp requires the participants to participate.  It requires them to think, extrapolate, discover, and be actively involved in on-the-spot learning.

To say I felt distinctly ill by the first break is putting it mildly.

To say I felt exhilarated by the end of the second day is putting it just as mildly.

We should have done a better job setting expectations up front. We should have been clear about what we expected the participants to do, and what they should expect to experience.

But even when expectations aren’t set correctly, there are often ways to salvage the situation.

And that’s what we did.

When everyone re-assembled after the morning break, we explained the format, including why we were conducting the program in this way. There were still plenty of doubters, but as we proceeded through the material – continuing to explain why along the way – they began to experience shifts in their thinking, knowledge, and understanding. And that resulted in shifts in their appreciation for the program as a whole.

Those of us designing and teaching the boot camp expected the people marketing the program and informing the participants to provide information about the format … information that, in hindsight, they probably didn’t have or know they needed to provide.

When you don’t set expectations, people make assumptions, and those assumptions can often be quite different from what you intend.

Because you’re familiar with the situation, you may think you don’t need to be explicit in setting expectations. In our case, we’d been working on this program for half a year. We were thoroughly steeped in the why, how, and what we were going to deliver. We assumed it would be obvious.

What’s the purpose of the meeting you’re scheduling? Why are you conducting that survey? Why did you choose to do things this way instead of that way? What’s the context?

Set clear expectations, even if you think you’re stating the obvious.

You’ll save a lot of time, frustration, and anxiety.