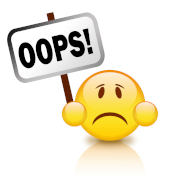 I talk a lot about the need to define success.

(And it is a need, not just a nice-to-have or a default to “but everyone knows what it means”; read more here and here; links open in new tabs, so you won’t lose your place.)

But we also need to define failure.

We do a lot to avoid failure – but – do we really know what it is we’re trying to stay away from?

Does everyone on your leadership team know what actually constitutes a failure?

Or are they confusing mistakes with failure?

A mistake is not a failure; it’s just a mistake. It might be a really big mistake, in which case it could lead to failure – but it’s still just a mistake.

This distinction is important, because if you haven’t defined failure, but instead instilled a fear of failure in your people, they’ll be reluctant – to say the least – to acknowledge mistakes. And that means mistakes will be hidden, solutions will be delayed or overlooked, and – guess what! – your chances of actual failure will become significantly higher.

What actually constitutes failure? Only you can answer that, personally as well as professionally. And as a leader, you owe it to your people to make sure they understand, first, that a mistake is not a failure, and second, what failure looks like for your projects and their career paths.

Shared meaning is crucial for success – and it goes way beyond just describing your corporate objectives and project plans. Let’s talk about how you can create true shared meaning around everything from success to failure to strategy to values and culture and more (oh my!).