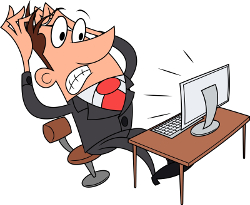 There’s a simple and obvious answer to their problem.

But they keep repeating the question.

Your frustration level is through the roof.

Your sanity – never mind your temper – is hanging by a very slender thread – a thread that’s just about to snap.

A consultant friend was struggling with this. A new client simply wouldn’t stop describing the problem he was having, no matter how many times my friend explained the solution. “I don’t get it,” my friend said. “I’ve broken the answer down into the simplest possible terms. This is a smart guy; he should have understood me from the start. But after 20 minutes of going around and around with him, I finally had to end the phone call with a feeble excuse about a meeting.”

And then she asked,

“Why wouldn’t he listen to me?”

My friend is a technology consultant. Her client is, as she said, a smart guy. He’s also a successful businessperson who freely admits that he’s got no time for technological details.

But he knows that technology is crucial to his business.

What he was really asking was, “Can I trust you to keep my business running?”

When I explained this to my friend, her eyes got big, and she said, “Ohhhh… of course.”

Whenever someone seems unable to hear a simple, obvious answer, there’s a deeper, emotionally-vulnerable question underneath.

If you pause and listen with curiosity, you can usually hear what that question is.

My consultant friend scheduled a meeting with her client during which she solved the problem he’d been asking about. But that’s not the real reason she met with him. She wanted to reassure him – subtly and tactfully – that she had the experience, expertise, and commitment to make sure the technology supporting his business would run smoothly.

And so was she.