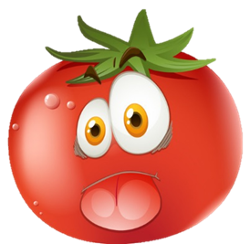 In my last post, I suggested that you list out the cast of characters throwing rotten tomatoes around in your head.

You know, your Inner Critic – or rather, your whole regiment of Critics, since none of us have just one. (If you want to go back and (re-)read that post, click this link; it opens in a new window, so you won’t lose your place here.)

The examples I named in that post were the Slavedriver, the Martyr, the Professor, and the Perfectionist, but there are many more.

As an example, while the Professor and the Perfectionist play a large part in helping people (you?) feel like a fraud in whatever work they do (or want to do), there are several others that contribute to the Fraud Factor and Imposter Syndrome. For instance, the Dutiful One often plays a role, telling you to obey rules and yield to other people’s “obviously superior” (or so it says) expertise instead of taking a stand as an expert yourself.

You get the point, I’m sure.

So what can you do?

I’ll tell you what not to do: don’t argue.

Your Inner Critics will always have one more reason why they’re right than you’ll ever have why they’re wrong.

It seems reasonable to argue, to try to convince them with logic, emotion, and even experience (“See?! I did that thing just fine, so why are you still telling me I’ll fail?”). But the Inner Critics can always find experiences that didn’t go well to prove their point (“Yeah, that was just a lucky break. Remember this time and this time and this time, when you failed miserably?”).

(This, by the way, is why what people call “affirmations” often don’t work. We call them affirmations, but they’re actually arguments in disguise.)

Instead of arguing, say, “Thank you for sharing.” And carry on.

Instead of arguing, say, “Okay.” And carry on.

Instead of arguing, say, “Thanks for trying to protect me.” And carry on.

These statements give the Inner Critics nothing to disagree with. They’re neutral. There’s no argument for them to push against.

The real challenge lies in the second step

All too often, we allow our Inner Critics to stop us dead in the water.

Whether it’s because we get sucked into arguing (it happens, even when we know better!), or because we feel as if we can’t take the next step until the Inner Critics say it’s okay (they never will), we stop. We know the next step. We know what to do to carry on with what we want. But we don’t do it.

We let the Inner Critics rule our lives, instead of claiming sovereignty – and claiming what we want.

What will you do?

Interested in learning more about self-talk and the Inner Critic? Click here to hop over to the description of my self-study program “Managing your Inner Critic: how to stop the rotten-tomato fight in your head.”