We have a groundhog problem.

It’s a big, fat groundhog that has figured out how to go under the low fence around the bean patch.

We just got a hav-a-hart trap on loan from a friend.

But I haven’t had time yet to set it up. So when I saw the groundhog squeezing under the fence this afternoon, I let our dog Bonnie out.

She was asleep when I jumped up and cried, “Let’s go get the groundhog!” She was excited because I was excited, and dashed out the door, but then … wha??? What am I looking for? Why am I out here running up and down in the heat?

The groundhog was having a really hard time getting out of the fenced-in bean patch, so she did finally spot it. And she was able to catch it and give it what-for before I told her to drop it, and the groundhog scampered away.

(No blood was shed on either side, and I would never have done this if I thought either groundhog or dog would be injured. Bonnie is well-behaved enough that I knew, without a doubt, that she’d drop it when I told her to.)

A poor-performing employee is a challenge for any manager

And a lot of the time, the poor performance has to do with misunderstanding, unclear expectations, or a lack of context.

Bonnie knew I was excited about something, and she very much wanted to respond – but – what did I actually want?

Most employees want to do well, even if only because they want their paycheck (and usually much more than just that).

But they can’t do well if they don’t know what “well” looks like. Just like Bonnie didn’t know what I was excited about and asking her to do – if your employees don’t have a clear understanding of what you want, or if they’ve somehow misinterpreted your instructions, they’ll be metaphorically running up and down trying to figure it out.

Similarly, they can’t do their best if they don’t know what the ultimate end goal is – the context for what you’re asking for, the thing that happens next.

(See “Sandwiches or Salad? Goals matter!” for more on this.)

So before you tell your employee that you’re disappointed in their performance, try asking them what they need in order to do better.

Training? Clearer direction? An understanding of how the Thing you’re asking them to do fits into the bigger picture? Mentoring on the best way to approach the task?

Any or all of these can help. 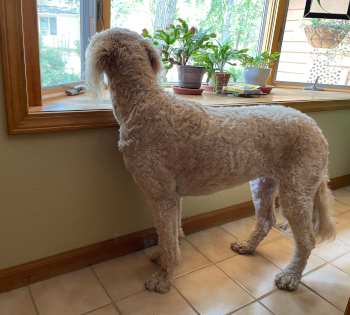 Bonnie on guard against the groundhog’s return

It wasn’t until Bonnie saw me pointing – and saw the groundhog – that she figured out what I wanted.

I’m opening the doors on a Community for first-line people managers: a Community of Practice, Learning, and Experience, offering managers the support they need to learn – and practice – the skills they need, including (of course) giving effective instructions and good feedback. Check it out.