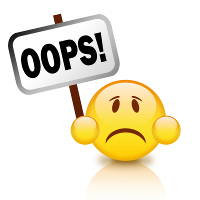 Your team member just celebrated their one-year anniversary with the company. High-fives and congrats all round.

And then the next day, or maybe a week later, you discover they’ve made an absolutely elementary mistake.

Confronted with the situation, they just look blank. “I didn’t know that!” is their best explanation.

Why didn’t they KNOW THIS ALREADY?

It’s such a basic, beginner-level thing. How can they have been here a full year and not know?

Probably because you didn’t tell them.

That’s a hard truth, but any number of studies have shown that people don’t make mistakes because they want to, or even because they’re not paying attention.

They make mistakes because they didn’t know any better.

There’s a psychological model called the “four stages of competence” or the “hierarchy of competence,” as shown in the image here. 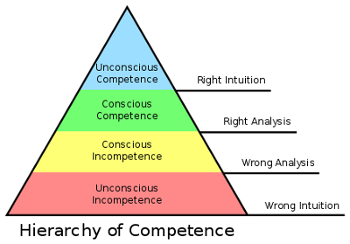 YOU, on the other hand, are happily at the peak of the pyramid, secure in your “unconscious competence” or RIGHT intuition.

To put it in more Zen terms, you no longer have beginner’s mind.

As an expert, you don’t know how to explain to your beginner-level employee the basics of what they don’t know – what they can’t know, because they don’t yet have enough experience or knowledge.

It goes further: you don’t even know you need to explain, because it’s such a simple fact of life for you.

Overcoming the curse of knowledge

This is also called “the curse of knowledge,” and it’s a very real challenge for any expert responsible for passing on their understanding to others.

Most managers and leaders aren’t trained in how to train their employees, and yet developing your staff (a.k.a. training, teaching, and mentoring them) is a key aspect of your job.

The reality is that you’re unconsciously incompetent in how to teach someone your expertise.

To become consciously competent, you need to step back. Make notes about what your team needs to know – even (especially!) the smallest details that you take for granted; this will remind you to tell them.

Ask your employees questions to clarify what they don’t know. (Questions have the added advantage of encouraging them to think through what they’re doing; they’ll learn better and faster through questions than through telling.) Give them the context within which their tasks reside: why are they doing this? what’s the bigger picture? how does their work contribute to that bigger picture?

No one wants to seem stupid

Make sure your employees know that they can and should ask for clarification when they’re not sure. If they sense that you’re frustrated and impatient with their lack of understanding, they may fool themselves into believing they know something when they really don’t (“wrong intuition”). Or they might be afraid to ask and reveal their ignorance to you.

It’s great when employees can figure things out on their own. But it’s really not great when, in trying to figure things out, they make mistakes. Finding the balance between too much hand-holding and too little guidance can be tricky … but it’s part of what makes a good leader and helps create a happy, engaged team.