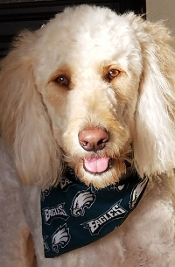 None of us have any idea how much impact we have on people.

A year and a half ago, a young woman saw my husband and me with our Golden Doodle, Bonnie. It was a crowded sidewalk. She was coming toward us, passed close by, tapped Bonnie on the head and said, “Doodlepop!”

We’ve never forgotten that, and often call Bonnie “Doodlepop!” I’d be willing to guess she doesn’t even remember the interaction.

Three years ago, my husband signed a short-term rental agreement on the house we lived in before buying the house where we are now. We had a cat at the time (no dog yet!), and part of the lease covered “damages inflicted by Said Cat.” We have referred to “said cat” (and various other “said” things) ever since. It’s standard lease language, and I doubt the landlord would have any reason to remember it.

Four years ago, a friend had a brief relationship. The relationship didn’t work out, but one thing that was said to her in the short time they were together caused her to make a profound change in her life. I imagine they both remember each other, but I seriously doubt the ex has any idea how important that one conversation was for my friend.

I heard a podcast a few months ago in which the person being interviewed mentioned a CEO who had hand-written a short note of appreciation to an employee. Years later, that employee still had the note folded into his wallet.

One or two words. A short conversation in an otherwise ill-fated relationship. A note that probably took five minutes, if that long, to write.

In their own ways, each of these events is an example of leadership.

Obviously, it can go the other way as well. One or two words can be hurtful; a short conversation can be destructive; a missed opportunity to show appreciation is unfortunate and sad; and a snarky, unkind note can be demoralizing.

Wherever we are and whoever we’re encountering, whatever we say is important.

Because we just never know the kind of lasting, meaningful impact we have.