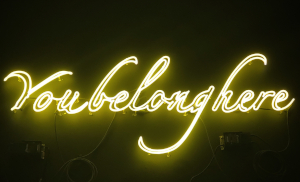 The first thing I did when I was promoted to project manager was to ask my team to tell me if there were problems or delays, instead of waiting until things reached a crisis point.

Looking back, I was at least attempting to create psychological safety in a company where that wasn’t exactly the norm. Long before anyone was fired on The Apprentice, we had a senior leader who was well known for firing people – so well known that someone actually had buttons made up that read “I was fired by…” and his name.

Unlike on The Apprentice, the firings didn’t stick.

Since then, psychological safety has become a bit of a buzzword, and I’m not a fan of buzzwords; when something has been “buzzed,” it loses impact and often ends up being eyeroll-inducing.

That said, the human need to feel safe within a group of people is undeniably hard-wired into us. And the reality that too many offices, teams, companies, managers, leaders don’t feel safe to be in or around is equally undeniable.

Meanwhile, the first-line manager has the most impact upon the majority of your company’s employees. And endless studies have proven that people quit because of their manager more often – by a wide margin – than for any other reason.

It would be easy to say that the first-line manager is, therefore, the one responsible for creating psychological safety. But to continue my own story, when my boss heard that I’d said that to my team, he was … let’s just say, startled. And in saying that to my team, I was swimming against the cultural current at that company.

It’s not optional; it is, whether you take care of it or not.

Defining what you want your culture to be is only the first step. Ensuring that leaders from top to bottom walk the talk is what makes it real.

Two options for improving culture in your company.

Option two: Contact me to set a time to talk about how your current culture impacts your people today – and how that can be improved.