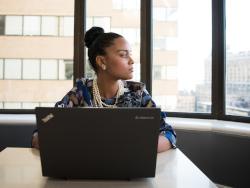 We’ve all heard that saying, typically in reference to C-suite executives, especially CEOs.

It may be true (though many CEOs have colleagues and formal mastermind groups supporting them and helping them feel less lonely).

But I’d say that all leadership is lonely, whether at the top, the bottom, or somewhere in between.

Especially the first-line manager working hard to become a leader.

The shift from doing individual work as part of a team of peers to leading that team is huge. The skill-set that got them that promotion into management is absolutely not the skill-set that will help them lead effectively. And most of them realize that pretty quickly.

There are generally three ways forward from here.

First, the fledgling manager can double down on the skills that got them promoted. But as the saying goes, what got you here won’t get you there – and doubling down on task orientation, micro-management, and trying to control All The Things definitely won’t get someone to effective leadership.

Second, the fledgling manager can decide that the team knows what to do and so – they should Just Do It. Essentially, they’re throwing up their hands and giving up, typically out of fear that they can’t figure it out, and after all, well, the team should know what to do and Just Do It, right?

This too is lonely. They’re sticking their head in the sand and hoping no one will notice. But their team feels abandoned, and eventually – inevitably – something significant will be overlooked.

Third, the fledgling manager can do their best to understand what they need to learn. They may or may not get support from their employer, in the form of coaching, training, and mentoring – and that support may or may not be enough for them to really get a handle on what it means to be a manager and leader.

And yes, it’s lonely. No one likes admitting they need help for a role they were just promoted into, especially if they’ve already been given what their employer thinks is “enough” support.

If the fledgling manager is a persistent self-starter who understands that they own their career, they’ll find a way to get the support they need if it’s not coming from their employer (or isn’t enough).

Lonely? Yes, but at least there’s a greater sense of self-determination and control. And in finding that support, they will hopefully also find a sense of community with others who understand, because they’re in the same situation.

As I said to someone the other day, you may feel all alone in this effort to be a good leader, but you’re so not alone. In fact, you’re in very good company, because this feeling of loneliness as you start your journey in leadership and management is almost universal. There are very few who don’t feel lonely, and those who don’t are often – let’s face it – just a tad bit on the egotistical side, let’s say!

So if you feel lonely in your pursuit of leadership growth, I hope you can take some comfort in knowing that you may feel alone – and in very real ways be alone – but there are a lot of people who share your situation and your loneliness.

And if you’re someone with responsibility for fledgling managers, I hope that reading this has shown you how they may need more help and support than they’re comfortable asking for, or that they may be receiving.

First-line managers impact the majority of any organization’s employees, so when they struggle – so do their teams, and so does their organization.

And this is why I created the Community of Practice, Learning, and Experience for first-line managers. It’s not a “program” or a “course”; it’s an interactive experiential learning community, where members normalize the experience of being a first-line manager, overcoming this deep sense of loneliness, and learn from each other AND me, an experienced leadership trainer, coach, and community facilitator. To learn more, click here.