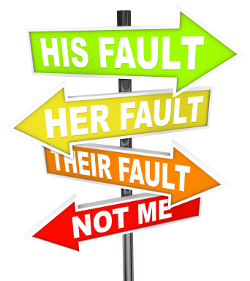 Most people don’t want to believe that they are the difficult person who’s causing a problem, or that they have any part in a miscommunication, disagreement, or conflict.

That’s not just my opinion; it’s borne out by a recent survey conducted by Fierce, Inc. (founded by Fierce Conversations author Susan Scott) and Quantum Workplace.

According to the report, only half of the 1,344 employees who responded to the survey believe they engage in “great or excellent” communication with managers and colleagues.

We do love to see ourselves in the best possible light, don’t we?

The reality is that for every person we think is difficult, there are probably at least as many people who think we’re the difficult one.

This obviously creates a disconnect, and leads to finger-pointing in every direction except back at ourselves. After all, they’re the problem, not you.

What if we each – every one of us – took 100% of the responsibility for communicating cleanly, clearly, and honestly?

What if we didn’t divide up responsibility, even 50/50, but instead every single person involved took 100%?

This doesn’t mean you’re the only one who has to change, do things differently, or “fix” the situation. After all, everyone has 100% of the responsibility.

It doesn’t mean you have to forgive anyone for bad behavior, since they have 100% of the responsibility for their own actions and words – and for making amends when necessary.

It does mean, however, that you are now responsible for taking action. That could mean speaking out, saying the uncomfortable truth, and pointing out the challenge.

It could also mean making amends for your mistakes.

Because if over 80% of the surveyed employees felt they were only half of the problem, that means someone’s got their head in the sand.

(Curious about the report? At the time of this writing, it’s available on the Fierce, Inc. website. Which is to say, it may not be there by the time you read this – and if so, by all means come to my Connect page and let me know.)